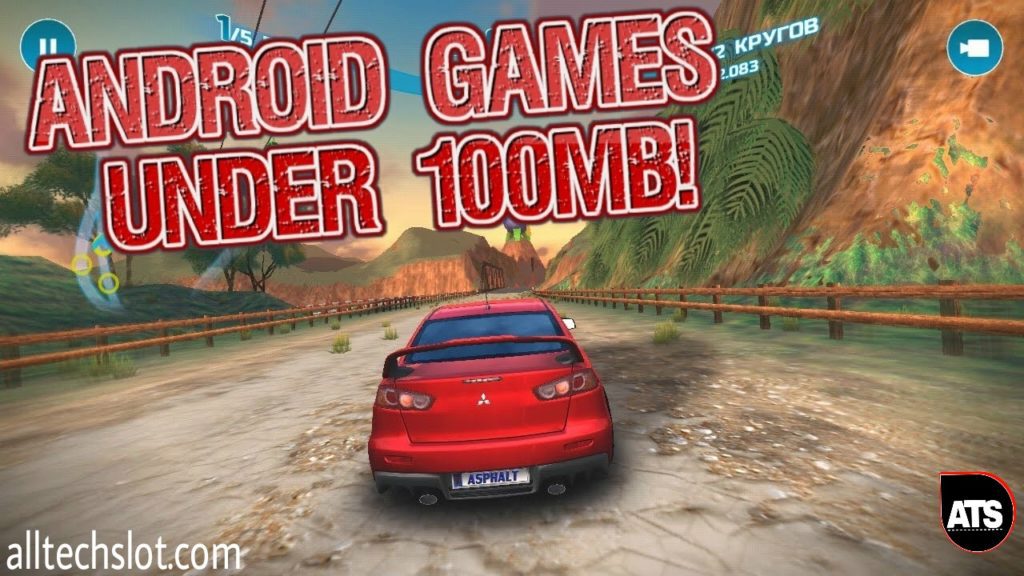 If you are looking for the Best Android games under 100MB, then this list is for you. If you are game addictive and want to play best and high-end graphics games on your smartphone but then you know these games have a downside, they consume a lot of battery and resources.

And this issue can be more annoying on phones with lesser memory, especially budget phones. So it’s not mean you have to leave your gaming world.

Cause here we compiled the list of most insane graphics and most high-end best Android games under 100MB. So you can freely enjoy high Graphics games on your android phone without a lesser memory problem.

These Best Android games under 100MB are not only fun to play but have equally high-end graphics. cause there is no compromise in the game’s graphics for a game addictive guy.

If You are a huge fan of racing games. And your phone wouldn’t let you play the popular Asphalt 8 or Real Racing 3 games. So I think you love to play this game on your android device. This game is a lighter version of Asphalt 8 from Gameloft and is the best fit for all racing enthusiasts. When it comes to the graphics, it’s not as great as Asphalt 8 but this game’s graphics are awesome and you never feel graphics problems while playing this game. This is one of the best games under 100MB.

This is one of my favorite games, that’s why this game is 2nd on this list. it’s one of the most popular games among gamers who love to play action games. After becoming popular in this game the second part of this. Vector is an exciting, arcade-style game featuring you as the exceptional free runner who won’t be held down by the system. where all your need is to run, slide, vault, and climb until you reach the target.
This game becomes more exciting with features of some extraordinary Parkour skills and action moves.

If you are a cricket fan, then you’ll love these light and high Graphics games. The World Cricket Championship2 is just 84 MB in size and the Graphics of WCC2 looks realistic and it’s way better than any other Cricket game available for the android platform. Wcc2 is the most advanced cricket game for Android smartphones. You can play the maximum number of cricket shots including the famous Dil-scoop, the Helicopter shot, and the Upper-Cut! If you are a true cricket fan you will surely love this game. WCC 2 is the best cricket game for android with commentary.

Subway Surfers is one of the most popular games in the world that’s why this game is on our list. This game is a lot similar to the famous Temple Run game on Android. Currently, this is one of the best Android games under 100MB.

The gameplay of this game is simple as you simply need to help Jake escape from the grumpy Inspector and his dog. Subway Surfers game is themed over rails where train bogies act as blocks and hurdles in the path.

If you are a bike lover then definitely you love this game. Traffic Rider game is one of the most popular bike games with over 100 million downloads and a 4.7-star rating. In case you are wondering, Traffic Rider has around 4 game modes Career, Endless, Time Trial, and Free Ride. Traffic Rider takes the endless racing genre to a whole new level by adding a full career mode.

Ride your bike in the endless highway roads overtaking the traffic, upgrade and buy new bikes to beat the missions in career mode. This Game is for football lovers especially for children cause the Perfect kick games graphics are 3D and kids love these type of games. As kicker and keeper, swipe to make spectacular goals and saves! Play for free in unlimited champion challenges against opponents from around the world live.

Race against a field of rival drivers, each with unique personalities and special abilities. Buggy Racing game’s graphics are average and not as great as other games. The interesting part of this game is the unique power-ups you earn as you progress through the gameplay.

If you love to play action shooting games like call of duty and counter strike then you’ll surely like this game. Special Force is a lot similar to a counter strike game for pc.
But the graphics are not equal to counterstrike but still, you can enjoy the high graphics while playing this game on your android device. There are so many missions in this game at different-different locations. You can also play with your friends in multiplayer mode online or with wifi Lan. It has 5 game modes (Classic, Resurrection, Capture the Flag, Zombie Mode, BombMode).

Ninja Fighting Spree is an ultimate action Ninja fighting game! In this Ninja Fighting Game The functions of the Ultimate Ninja are spying, assassination, and guerrilla warfare. Crush your enemies with your angry ninja agility attacks. Be fast, stealthy, and deadly to sneak up on ninja warriors and kill them all with your strong hits. Enter the world of Japanese ninja and kill your rivals. kill all the rivals and prove your skills as a Master Ninja Kung Fu style. Ninja Fighting Spree is an action-adventure game. This game is unique, with its easy controls and challenging mission in a 3D environment. This game is very addictive.

Last but not least in our list is Trigger FPS. If You ever played an IGI game on your PC then probably you would like this game. Trigger FPS is an amazing Realistic First Person game.  This is the one and only fps game on this list. This game is an action game and if you want good FPS in less than 100MB then you can install this game. You’ll get very good FPS and a good mission game which you will enjoy while playing. And this is also one of the best gun action games under 100MB for android phones.

So, that was the list of all the games which is less than or equal to 100MB. Android games under 100MB are plenty on Google Play Store. But not all can be listed here. Here I only listed games that have awesome graphics. If you have any suggestions or queries feel free to comment. Thank You 🙂

Hello Readers, Raj Singh is the Owner and Editor of "All Tech Slot" is a Passionate Blogger from Lucknow, India. He is a Professional Content Writer and Analyst. He loves to share his learnings from his blog and also loves to read and write about Blog technology stuffs. Catch him on Social media : | Linked In | Instagram |Pinterest |

The Worst Scams In Video Games

Best Games for Nintendo Switch in 2022